KNOW THE LATEST TRENDS AND WHAT IT STIMULATES US AND MOTIVATES

On October 21, a cyber attack against the company Dyn pull down the major internet companies websites

WhatsApp, Twitter, Github, Paypal, Netflix, Spotify,Airbnb  and Playstation services, and many important web stopped working or worked intermittently during most part of the Friday. 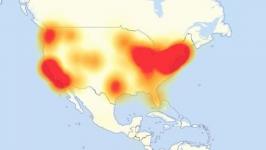 Unlike other similar attacks, this time the attack was focused on one of the main providers of DNS (Domain Name Servers) that are responsible for translating the names we use to access websites (ex. www.softecnia.es) in the corresponding IP address 82.194.87.110. This service is widely used because people remembers easyly words than a number sequence.

Raising the attack against the company Dyn, clients (computers, phones, etc.) did not know how to get to the servers of companies, as Dyn was not responding with the IP address to use. Due the DNS service was not running, it was impossible for the user to connect with the services and websites of the companies concerned.

The explanation being given now to this attack is that to get the hang of all the company Dyn DNS servers, they caused an enormous amount of simultaneous requests (it was commented 1.2 Tb / sec); requested from many different devices. To achieve this, the group NewWorldHacking, who attributed the attack to themselves, claims to have done so using a vulnerability in the "Internet of things", appliances and other equipment for its operation have Internet access.

Appliances with Internet access have implemented a small core S.O., Linux usually, for the basic procedures. Unlike personal computers, smartphones and other mobile devices, we do not tend to worry about updating the appliaces system. Some time ago, we already commented on this site, it had discovered some vulnerabilities in the Linux systems (as the Shellshock bash bug,  for example) that had been implemented for many years. On computers and mobile devices, it could be solved with an update package affected, but it was not clear how update this kind of equipment, hard to access to be updated.

On October 21, a cyber attack against the company Dyn pull down the major internet compani...

Outlook 2016 does not synchronize IMAP folders

We are at your disposal

Fields with an * are mandatory